Define and describe discrete levels of impact. Use a small and consistent set of factors to define each level. For example: To compare the degree of public support or collaboration for different facility siting options, it may be important to consider both:

The following attribute was used in Keeney and Sicherman (1983) in an analysis to evaluate potential power plant sites. From Gregory and Keeney (2003) (click to enlarge).

Such scales are useful in an ecological context as well. To rank environmental problems in one area of the country, the US EPA used a defined impact scale based on:

The resulting constructed scale is shown below (EPA 1993) (click to enlarge). 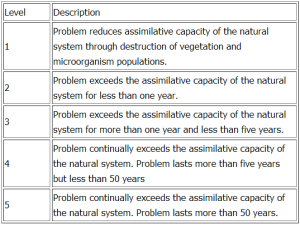 These topics are addressed in the discussion questions.

A scale that weights the quantity of something by its quality. It’s used when the impact is determined both by quantity and quality. For example (click to enlarge):

Yes/no criteria can be useful in cases where there are clear thresholds – e.g., compliance with a regulatory standard or legal requirement. However, use caution in using “consistency” with a policy directive or with practices in other jurisdictions as an evaluation criterion. It is usually much better to identify the underlying fundamental objective that this consistency is meant to address.

Yes/no criteria can also usefully be used at a screening stage – even if there is no firm threshold for acceptability, it may be possible to establish some value for a criterion that clearly is not acceptable and use this to screen out clearly unacceptable alternatives.

However, yes/no criteria often hide important trade-off information; for example consider one alternative that is 2% below a threshold, and another that is 50% below a threshold. In some cases, we would probably want to know that the first alternative almost made the threshold whereas the second missed it by a long way. With a yes/no criterion, we would be indifferent to these two alternatives because both would simply rate ‘no’.